The number of anomalous data points to hold for until generating an event. Suppose Hold for = 1. When a metric generates an anomaly, the detector holds for one more anomaly before it generates an event.

This window is 1 by default for most supported metrics. You might want to increase this number for a specific metric in the following corner case:

NOTE: If you increase the Hold For window, the detector might miss some anomalies that do not generate enough consecutive data points to trigger an anomaly event.

Consider the following metric, which switches between anomalous and normal states every 2 minutes or so. When hold-for and reset-hold-for are both set to the default of 1, this results in a spurt of anomalies. 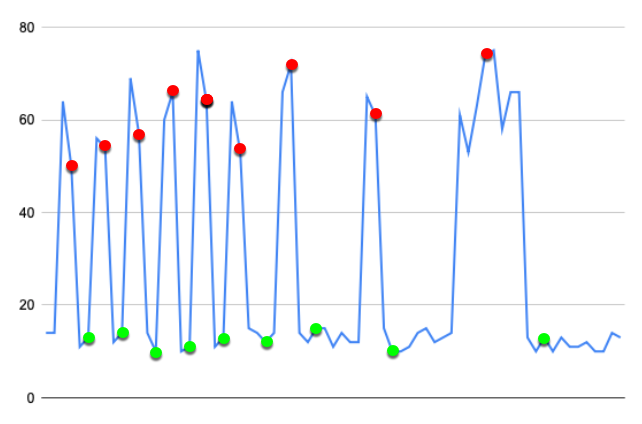 You might decide that this is normal behavior, and that you only want to generate anomalies when the metric is in anomalous state for 3 minutes or more. In this case, set hold-for and reset-hold-for to 2 or higher. 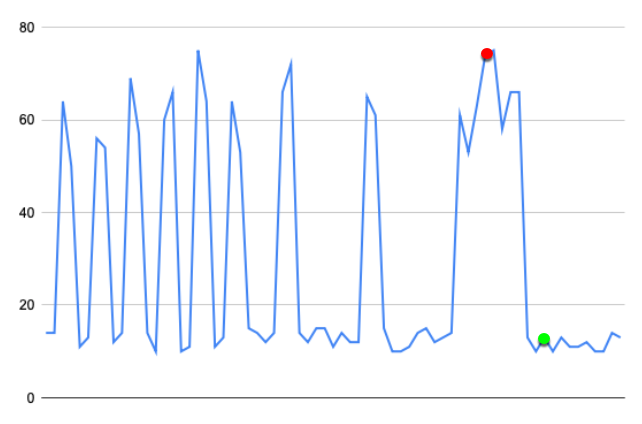 The number of datums to collect before anomaly detection begins.

The minimum possible deviation used to calculate anomalies, based on the historic range of values. This setting is useful for metric data sets with very narrow ranges.

Consider the following metric, where the value remains within 1.0 and 1.05 nearly all the time. If the range of values is very narrow, even tiny deviations can result in "false-positive" anomalies.

With the minimum deviation set to 0.3, only values outside of 0.3 times the mean (plus or minus) are considered for anomaly detection.

Number of datums to keep in memory to determine the threshold ranges.

The number of standard deviations from the norm to determine if a data point is anomalous. You might want to change this setting in the following cases:

NOTE: Changing the number of deviations can affect anomaly detection dramatically. As with any change to an anomaly detector, you should closely monitor the metric after you apply the change to ensure that you are getting the detection behavior you want.

Consider the following metric, where the number of deviations is set to 4.

If we lower the number of deviations to 2, more data points are now considered anomalous.

If we raise the number of deviations to 8, fewer data points are now considered anomalous.

When False, generate an anomaly for every anomalous data point.

By default, the Adaptive detector calculates upper and lower sigma values to determine anomalies above and below the metric mean. Enable this to calculate the same sigma value for anomalies in both directions.

In some cases, you can change the anomaly engine for a specific metric. See Anomaly Detectors.

(Threshold detector only) Consider Low Threshold or High Threshold only, or both High and Low thresholds to identify anomalies.

In some cases, you can change the anomaly engine for a specific metric. See Anomaly Detectors.

The fully-qualified name of the managed object associated with a metric. The full name is in the format namespace:managed-object:archive.

You can view the FQM at the top of a metric chart in the UI:

The universally-unique ID of a collector. The UUID is in the format namespace:managed-object:archive.

You can view the UUID in the UI page for the collector.